Note that this is a very early version, I have been using it very briefly in production and found it both helpful and fun - so I liked to share it already. The Quixote.cs is expected to change quite a lot especially in the beginning, I intend to update this package as Quixote is updated.

Add this package and you can write BDD like tests in Razor code; for example to check that a page has the right title, the right number of links, contains no "error" text. I also added a sample to look for all pages for "error" texts.

Install the package and run the test by opening mysite.com/quixote

Edit the tests in the razor scripts in the /tests folder

Tip: Run the tests manually or scheduled with the help of the Scheduler package - with that you can get daily test reports to your email inbox (before your client calls you and asks whats wrong).

In version 0.2 (which is also experimental) : I added w3c-validations:

I also added a simplified default test script for any dynamic node. For now it tests for error texts and validates. See screen shot 2 "Default test ..." Use it like this:

Look at the first screen shot below. It tells us that the title of the startpage is wrong, otherwise everything is correct. If some of the child pages should have a Xslt or Razor error we would get a red row for that page.

In the second screen shot we see version 0.2 running with validations. We see that no page validates - which is no surprise as the site runs on localhost. When run on a live site though, it works as expected. It's using the online w3c xhtml validator and looks for the success string. I don't know if it's recommended to use the validator in an automated way like this? 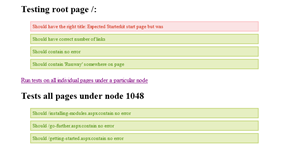 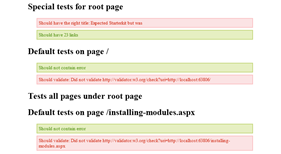 Discussions, questions, suggestions about this project.