This package lets you specify one or more document types that will be excluded from Umbraco-generated URLs, thus making them "invisible". Those can be used as grouping nodes and they will not appear as part of the URL.

After you install the package, you will have to add one appSettings entry to your web.config file, as follows:

Where docTypeToMakeVirtual is the document type alias you want to be treated as a "virtual" node.

You can define more than one "rules" for docTypes by separating them with commas, as follows:

You can also use wildcards at the start and/or the end of the document type alias, like this:

Supposing that groupingNode1 and groupingNode2 are virtual nodes, the path for article1 will be /articles/article1. Okay, but what if we add a new article named "article1" under groupingNode2?

The plugin checks nodes on save and changes their names accordingly to protect you from this. More specifically, it checks if the parent node of the node being saved is a virtual node and, if so, it checks all its sibling nodes to see if there is already another node using the same name. It then adjusts numbering accordingly.

So, if you saved a new node named "article1" under "groupingNode2" it would become:

And then if you saved another node named "article1" again under "groupingNode1" it would become "article1 (2)" like this:

This ensures that there are no duplicate urls. Of course, to keep things simple, I've implemented checks only a level up - if you have multiple virtual nodes under each other and multiple nodes with the same name in different levels, better be careful because no checks there. (Yes, I'm lazy).

Bugfix: Content Finder would return a Dynamic node instead of IPublishedContent when getting a node's path from cache which would cause an exception when accessing the node for a second time.

Bugfix: Publishing a home page in case there were more than one homepages (e.g. multiple language) would cause an exception due to incorrect handling of levels.

Bugfix: Process normally when calling .UrlWithDomain() extension by removing the host part, processing paths and appending again at the end

Bugfix: Prevent exception when parent node is null (maybe unpublished or otherwise not yet persisted)

Bugfix: Prevent errors when node name is in the form "(my node name)" (quotes included)

Bugfix: The original node's name would change to a numbered one when more nodes with the same name had been added under the same virtual path and the original node was republished

This package will work with Umbraco version 7.5 or higher (tested on 7.5.2) which includes the new 301 redirect tracker. However, Umbraco cannot correctly track and create 301 redirects to urls that come from this package, so if the url for a node included in a path that contains one or more virtual nodes is renamed, the automatic 301 redirect created will be from the full (actual) path to the new (shortened path) and not from the full (shortened) path to the new (shortened) path.

That is, if the url /aaa/bbb/ccc is setup to create a virtual node (let's say for the doctype of "bbb") and becomes "/aaa/ccc" then renaming "ccc" to "ccc2" will create a 301 redirect rule as follows:

This only affects automatic 301 redirects, but otherwise the package is going to function correctly. 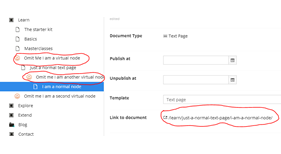 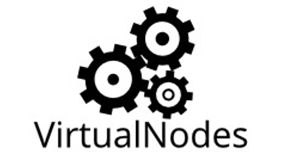 Put all your questions, feature requests and bug reports here